Sumy Window on America Center invites you to come on Sunday, January 17th, at 2.30p.m. and see a great movie in English.
The movie is “To Kill a Mocking Bird” in which starring such famous actors as Mary Badham, Phillip Alford,
John Megna, Ruth White and others.

The movie is about a white woman accuses a black man of rape. Though he is obviously innocent,
the outcome of his trial is such a foregone conclusion that no lawyer will step foward to defend
him - except Peck, the town's most distinguished citizen. His compassionate defense costs him many
friendships but earns him the respect and admiration of his two motherless children.

On January, 12th there was the first meeting of English Speaking club " 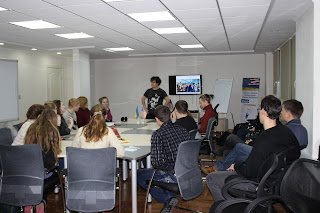 English Club with Alec" in the new year. The topic of the meeting was "The events of the past year and the expectations for the new year". The participants had an exciting discussion about movies, especially the newest part of "Star Wars", music albums and also political events that occured in the world in 2015. People shared with each other. One of the most interesting subtopics was "Traveling". The participants told about their traveling plans, which varied from classical traveling dreams such London or Paris to unsual and extraordinary places like Himalayan mountains.
Автор: Window on America center на 05:55 Комментариев нет: