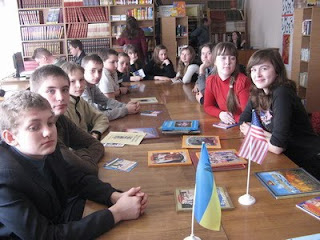 On April 20, the pupils from school № 8 visited WOA center. They were presented to WOA center’s resources, encyclopedias Americana and Britannica, dictionaries.
The main topic of our meeting was to know a lot of interesting facts about the USA, its geography, history, the presidents, it’s people. We had gathered together to hold the quiz. It was dedicated to the USA. We travelled about the USA, our trip was merry and interesting. This competition showed achievements and good knowledge of pupils.
Автор: Window on America center на 23:07 Комментариев нет:

Family Law in the USA and Ukraine 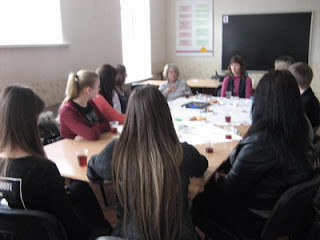 On April 12, the students of the Sumy Branch of Kharkiv National University of Internal Affairs had a chance to take part in the discussion with the native speaker, PCV Arden Stone on family law in the USA and Ukraine. The discussion was very informative and touched on marriages, divorces, adoption, prenuptial agreements, child custody, and property settlements. Historically, in the United States, family law was based on European feudalism. Marriage, as defined by law before the beginning of the 20th century, enabled the husband to become the owner of the wife property’s as well as her legal guardian, despite property laws that gave women more rights regarding property ownership.
It was interesting to know that child custody had been traditionally awarded to mothers from the onset of the 20th century, but as the father's role in the family evolved, laws changed to allow fathers custody, and eventually, the concept of joint custody was created. In joint custody, both parents share the responsibility of taking care of the child. Court decisions do not always make both parents happy.
Students got their interest in the event and expressed a great wish to meet again.
Автор: Window on America center на 01:13 Комментариев нет: 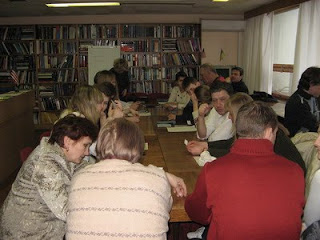 Welcome to English-Speaking Club। Last month we had a variety of topics discussed:15.03 “Idioms. World News” 22.03 “Eating Habits” 29.03 “Speaking about Social Issues” Is it possible for a man and a woman to be friends? Is it obligatory to wear a school uniform in Ukrainian schools? What musical style would you prefer if you could play a musical instrument? What school subjects should be added to the curriculum? These and other matters concerning social issues were discussed at the meeting of our English-speaking club. The participants were given various questions and talked them over in the groups of two. After that each participant had a chance to share his opinion with the whole group and to tell his pros and corns.
Автор: Window on America center на 23:31 Комментариев нет: 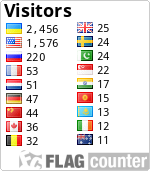